Dear readers, today, August 22, would’ve been my mom’s 77th birthday. A bit of a departure from the norm, but today’s post is my birthday letter to her. I hope none of you can relate, but the sad truth is, eventually, you’ll all have to relate. For that I’m sorry. (And the whole post isn’t as heavy as that last sentence was I hope. Wow!) I’ll return to normal programming – whatever that is – next time.

Here we are again, the second birthday of yours that you’re no longer here to celebrate. It’s hard to believe that just two years ago, we sat on David’s patio on that beautiful August day grilling out and drinking margaritas, celebrating you. Two years. It feels like both an eternity and a second. Back then I stupidly thought that we’d have you for so much longer; our grandmother made it all the way to 87, so naturally, I thought you would too. But 75 was your magic number and I think you knew that. I think you knew, if not in August on your birthday, then definitely in October or November, that 75 was it and I think you also knew that you wouldn’t even live to see 2011.  It was stupid of me to assume you’d be here for so much longer. Now I know it’s stupid to assume even one more day will happen for any of us. As you used to tell me (while I rolled my eyes good naturedly at what I called your Email Forward Speak) every day is a gift. I knew that then – we all know that – but you don’t really get it until you just do. Now I get it.

I miss you. So much. Running off to France didn’t make me miss you any less, it jut changed the scenery for my feelings. Twenty months ago, people told me that it would get easier – not easier in that I’d miss you less but easier to have a normal day without feeling … what? The absolute blackness and finality of loss, of losing someone that you can never get back, of knowing that I’d have to spend the rest of my life without you, the person who made me and raised me? Yeah, I guess all that. And more. I still feel that every day, but not for as long as I did. Most days I feel happy; every day I wish I could talk to you.

Our last picture together, Christmas Eve 2010.

You must have been so psyched when you had a girl after two rough-housing (but awesome) boys. I bet you thought a girl would finally be your ticket to having someone around who liked girlie things, like shopping, makeup, and the color pink.  And on those counts, you were right; check, check, and check. I bet you also thought that your daughter would be the neatest and most organized one of all three of your kids – surely that’s a slam dunk when your other kids are boys, right? That was true for a while, but now, I think we know who’s the messiest and least organized of the three us of.  (Hint: it’s not your male children.) You probably also counted on a daughter who would grow up wanting to fall in love (check and still checked, universe), get married (check, then uncheck), and would be dying to have some kids (question mark, then uncheck). And I’m sure you thought that the daughter would be the one to stay closest to home, to take care of you when you were old.

Instead you got me: outwardly messy but organized in my head, maybe one of five woman in the world who actually prefers dogs to children (childbirth scares the crap out of me, you know that, but you also know I adore my friends’ kids), the kid who prefers wanderlust to stability and west coast to east. And that last point means I lived the last twelve years of my adult life so far away from you that it required a plane ride just to see you. I’m so sorry. That’s one of the things I wish I could’ve said to you: I’m sorry that I was so very far away from you. I loved my life, but I missed you. That must be one of the worst and suckiest things about being a parent: raising these human beings that you love, who love you back, then sending them out in the world only to have them go so far away that they never come back to you. Maybe that’s why I can’t be a mom. I don’t think I could bear it.

I also wanted to say that I’m super proud of you and how resourceful you were in your life. It must’ve been scary to leave the man you were married to for twenty-two years – to actually walk out the door and go –  and move back in with your mother, your youngest kid in tow, without a job. It must’ve been scary applying for professional jobs with no experience, then applying for and signing on the dotted line to buy a house with just your (probably) entry-level income and a kid to support. People do that all the time now, but back then, it wasn’t common yet for a woman to get divorced and take on life without a man. After you got remarried, it must have been hard to try and raise someone else’s kids. Later still, it must have been terrifying to start losing your friends, one by one. Then to get sick, to feel terrible, and not know why, and have doctors not have a clue what to do to make you better. But you made it all look so easy.  As I get older, I appreciate even more how hard those things, and so many others, must have been.

The thing I’m sorriest about – that we’re all sorriest about, I know – is that you were by yourself when you left us. That breaks my heart. That all three of us were with our father and that no one was with you … that has broken my heart every day since it happened. Were you scared? Did you know it was coming? Did it hurt? I have so many questions. You know that all three of us would’ve done anything, stayed instead of going home after Christmas, flown across the country, driven all night, just to be with you, right?, Knowing how you never wanted to burden anyone with anything, I’m guessing you didn’t want to “burden” us with that. But know that we hate that you were by yourself. I know I speak for all of us when I say it would have been a privilege to be with you as you left this world. Because you gave us so much while you were in it.

Anyway. Again with the “anyway.”

Today, as your birthday present, I’m going to do something I think you’d like: I’m going to make you a permanent part of Paris. There’s this bridge here that everyone puts locks on; you write the name of your true love on the lock then throw away the key into the Seine, to make it last forever. As far as I know there’s no rule that it has to be romantic love; I can’t imagine a truer love than the love I have for you, my sweet Mom, so today you get a lock and a view. I’m putting you on the side that faces the Eiffel Tower because I know you’d like that. Thanks for getting me here, by the way. I hope you’re enjoying it, because I know you’re with me. I feel you all the time now. 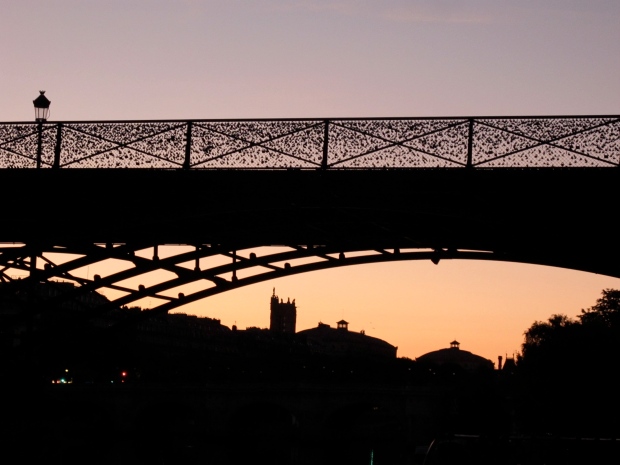 Last thing: some new recruits have come your way since you got there. It’s incredibly sad for us here, but they’re good people, and my hope is that today, in addition to all the other people you have around you, you’ll invite these new friends to your birthday party. One of them was an incredibly handsome and very nice movie star, Mom. YOU’RE WELCOME. See? Me living in California had its few perks, even in the after life. I’m sure they’ve gotten the hang of it by now, but if you could show them the ropes as you know them and say hi today, maybe share a margarita (like in the picture here – remember? Your last birthday we had those….) and an iced tea (for the non-drinkers) I think you might like them. Look out for Hal, Shelby, Chad, and Charlotte. Kelly, Kate, Darvy and I thank you. 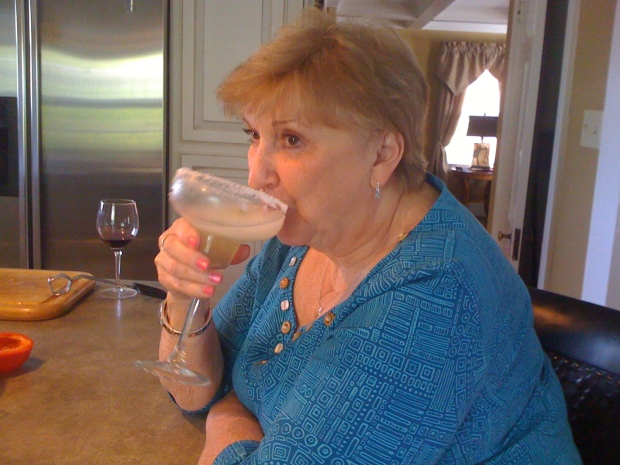 So happy birthday. I hope I’m doing okay here, I hope I’m making you as proud of me as I was (and still am) of you. I love you and miss you more than you will ever know. That’s actually probably not true because as you always used to say to me (sternly enough that it requires all caps): YOUR MOTHER KNOWS EVERYTHING. ALWAYS. You’re right, of course. (You always were.)

← Up All Night in Paris: A Photo Tour
Home, Fall, and My Paris Surfboard →