For Just One Post, I’m Gonna Be “That” Girl: 5 Things Yoga Taught Me

Today is my two-year yogaversary. I say that in all seriousness, without a hint of irony, patchouli, or lower-back tattoo-age to be found.

On a whim one Sunday morning in July of 2010, I went to a Bikram yoga class: I’d been a few times over the years and remembered it being challenging, but not in a knee-pounding sort of way.

I found myself in a room that was heated to 105 degrees with 40 percent humidity, surrounded by almost-naked, lithe, strong, beautiful yoga bodies. I wanted to cry. It was so freaking hot and I felt fat. My legs shook from weakness during every pose.

My old studio in San Francisco, Funky Door. Ahhh, I miss all that space …

So on that day, I made myself a promise that seemed feasible: I would do this hellacious thing known as Bikram five days in a row, then I’d go at least four times a week for the next thirty days and see what happened.

I didn’t need thirty days to convince me. After seven days, I’d lost ten pounds. I felt like a rock star. I was eating healthier (and much less), my hair and skin were glowing, and every part of my body, inside and out, felt stronger and better. After years of running, walking, swimming, spinning, and every other exercise craze out there, I had found my thing. Two years later, it’s still my thing. I go four to five times a week, without fail. It’s still hot. And it’s still hard.

I’m sharing this because, as dramatic as it sounds (Who, me? Dramatic?), doing yoga really has changed my life. A few months after I started, my life basically shit the bed, creating shock, stress, sadness, ambiguity, depression, fear, loneliness, and a whole other cast of ugly characters that I hope to never see again all at the same time in my life. But one of the constants in my life was this yoga class that I, for some strange reason, continued to show up to every day. The yoga was the same every time. It never ever changed.  I needed that.

I clung to it like a life raft. And I learned that all the crunchy, touchy-feely things they say in yoga classes can sometimes be true, not just in yoga, but in life.

You have to try. My teachers are always telling us, “Yoga is about trying.” It’s not about doing the postures perfectly, it’s about being the best you can be on that particular day, giving it all you have, going just past the place you feel comfortable. In real life (i.e. non-yoga situations), having someone tell me to try harder can sometimes make me crazy. How can I try harder? What the fuck am I supposed to do? In yoga, it’ easier because “trying harder” is specific: Get your foot behind your calf. Kick your leg higher. Bring your forehead to your knee.

It’s the same in real life, too, if we could just remember to break life down into simpler steps. Want to write a book (ahem)? Guess what? You have to write every day. Want to stop smoking? Run ten miles? You have to work a little toward what you want every single day, doing something that maybe doesn’t feel comfortable at first, or doing something you may not feel like doing that day. Then one day, the uncomfortable thing is your new norm and you start the cycle all over again. Little by little, day by day, you’re doing it.  And one day, after we try enough …
Change happens. Your book is done. You finish your marathon or you walk twenty feet to the mailbox. For two years now, I’ve been trying to get my foot all the way behind my calf in Eagle pose (this is a pic so you can see what I mean), but I can’t because my hips aren’t open enough. Not yet, anyway. Last week, I realized I had two of my five toes behind my calf and I actually laughed out loud in class I was so happy. Two years. Two toes.
Day by day, millimeter by millimeter.

No body is perfect. In Bikram yoga, you see a lot of people wearing next to nothing. As it turns out, everybody’s got something. A little belly. Some outer thigh stuff. Triceps that could be tighter. This has been super liberating because I’ve obsessed over my sub-par body for, oh, basically my whole life. Only Giselle is perfect. The rest of us, not so much.
Once I figured this out, a lot of stuff changed. I was happier, more confident. And I stopped feeling guilty when I ate something bad for me. Even better, I actually ate more bad-for-me things, because life is short – way too short to miss out on (a reasonable portion of) cupcakes, burritos, wine, etc.

Two years ago, I’m not sure I would’ve decided I wanted to focus on food as a writer, because when you think of yourself as a girl with an imperfect body and then you tell people you’re a food writer, you can almost hear their judgmental wheels turning, or at least that’s what I thought. Now I think this (and thank you to my friend Annie, for sharing this mantra): this is me, this is who I am; take it or leave it. If you don’t like the way I look or that I eat hamburgers and croissants for a living, you can go find a friend or girlfriend who’s better looking and thinner … go for it. I hope your relationship over lettuce and water is satisfying.
You can make it through sixty seconds (or twelve months) of anything. When I’m balancing on one toe, my leg kicked up behind me, my heart pounding out of my chest, sweat running off me like a waterfall, all I want to do is quit. Because what sane person would sign up for that?  But then I remember: I only have to do this for sixty seconds and then I get a break.
Admittedly, the shitty things in real life almost always last longer than sixty seconds. 2011 was a whole year of Triangle, but I knew that 2012 would be a whole year of Savasana, so I kept reminding myself: a break is coming. Better things are on the other side.
It works for everything, too, like moving to another country, running a mile, learning to surf, going to an expat meetup when you don’t know a single soul, sitting through a work seminar when you’d rather slit your wrists, waiting to see someone you really miss. It’s just an hour, a day, a year … whatever. Life’s version of savasana is coming. 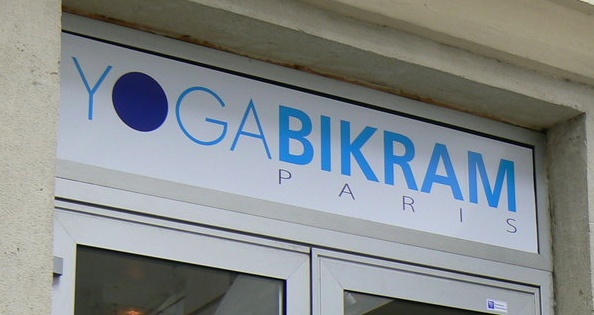 It’s okay to not be the best at everything; just (try to) be the best at something. I used to compare myself to other people. Now I don’t. In some postures, I’m still behind most people (hello, two toes behind my calf); in others, I. Kick. ASS. Like Standing Bow: I can’t do the standing splits – yet! – but I keep kicking for the whole posture and never fall.

No one’s good at everything – in yoga or in life – and seeing people try to succeed in one posture and struggle in the next reminds me that this is exactly what happens when we step off our mats.

I hope you don’t feel like you’ve just been Jehovah’s Witnessed or Heavens Gated. I’m not a paid spokesperson for Bikram. The point in sharing this is that I think yoga – any kind of yoga – and exercise in general can change our perspectives on things. It keeps us healthy and lean, but it also gives us confidence to do little things we may not have done before, then eventually, big things we may not have done before. And that’s kind of what it’s all about, isn’t it?

2 thoughts on “For Just One Post, I’m Gonna Be “That” Girl: 5 Things Yoga Taught Me”