Home, Fall, and My Paris Surfboard

As America prepares to celebrate its long weekend and one day of freedom from laboring, I’m sitting in Paris, contemplating how freaking lucky I am to have been given this opportunity not to labor. Though to be clear: I’m actually working pretty hard, I’m just not getting paid. I’m working on some things that I hope someday pay off, but maybe they won’t. Who knows?

So much has changed since last Labor Day. A year ago, I would never have had this laissez-faire attitude about whether the time I spent on something would result in money.

Exactly one year ago today at the exact time I’m typing this sentence, I was trying hard not to knock anyone over as I practically ran down Market Street, clicking my heels together; I was on my way to Bali to learn how to surf, all set and ready to go with a beach pedicure, a new haircut, and a couple of new bathing suits in which I’d brave the Indian Ocean.

For two glorious weeks, I got knocked around, bruised, cut, and beaten to crap while I swallowed half the ocean and met some of the coolest women in the world (along with one of my besties, who came with me). All this just to stand up on a surfboard for few minutes, mere seconds at a time. It was just long enough for me to catch the surfing bug and to wish and dream and hope that someday, I could do that every single day.

Two short weeks later, I was back at my desk, bathed in artificial light, counting the minutes til the end of every day and counting the days til Paris. And wondering: will I actually do this? Will I really be brave enough to go? Then I remembered that pure-joy feeling of standing up on a surfboard, of mastering the ocean and my sense of balance for five seconds. I wanted that feeling every day, for longer than five seconds, even if not on a surfboard. My life was pretty awesome in San Francisco, but I hadn’t had that standing-up-on-a-surfboard feeling in a long time.

Me, elated to be up, on the smallest wave in the world.

Fast forward to today, where I’m walking down the Rue Cherche-Midi in Paris. It’s August 31, but it’s definitely fall in Paris; the leaves haven’t changed colors yet, but they’re already swirling around in the cool air, piles of them resting in between the scooters and the tiny cars parked on the street. I’m carrying a white bag from Poilâne, and it has not one, but two treats in it: a croissant and a petit pain au raisin. (Croissants are my baseline treat, but I always try something else with them. Welcome to my life of excess in Paris.)

As I walk down the street admiring all the gorgeous coats and tall fall boots already adorning the windows, I take one bite of the croissant and then one bite of the petit pain au raisin, vowing to practice restraint, and then I feel something familiar. It’s a combination of a bunch of things: memory, taste, smell, and a deep familiar feeling in my gut, and I can only describe it with the one word I keep coming back to here in Paris: home. I felt at home. 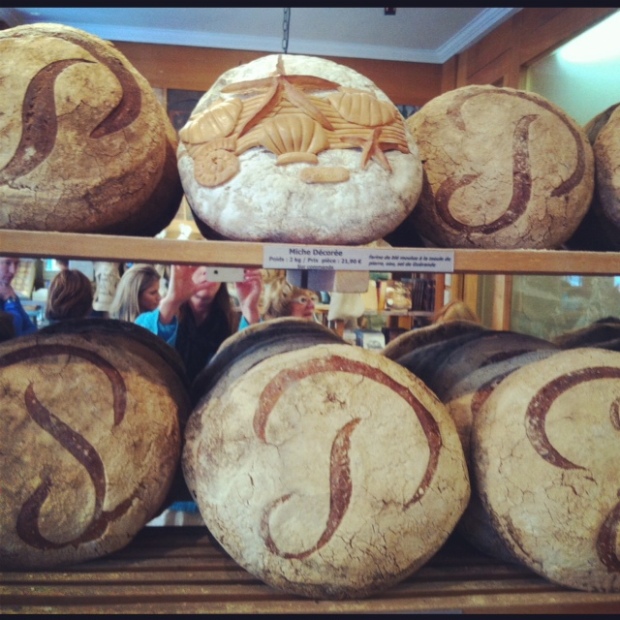 Oh, how I love thee, Poilâne.

Hang with me for a second on what might end up being a cheesy roll down Memory Lane: I have this very vivid memory from what I think was somewhere around the tenth grade. It was a Sunday afternoon in October in Lexington, Kentucky. The leaves were already orange and brown and the air outside was crisp; inside, my mom and I made homemade chocolate chip cookies. While they were baking, we carved pumpkins for Halloween and put them on our front porch, and probably recapped a football game we’d lost the day before and pined for basketball season to come in just a little over a month. After that, I had to go to The Red Mile, a harness racing track in Lexington, for a volunteer event. When I came home, we ate more of the cookies and had some spiced cider.

That’s quintessential autumn for me, but it’s also home. Of all the memories I have, if I had to zero in on the single one at the very center of all of them, it would be that one, that day. Today when I took a bite of my croissant and my petit pain au raisin, that’s what I felt.

If you’ve read this blog a little or followed my Instagram/Tumblr feed, you know that food is kind of a big deal in my life. But food for me isn’t just about how delicious something tastes or how beautiful it looks on the plate (though I’m a fan of that, too); for me, it’s about how it makes me feel. It always has been. My favorite foods are still the simplest ones that remind me of home: fresh, just-shucked corn, fried with fresh milk and crispy bacon; homemade peach ice cream made sitting on our front porch in our porch swing; a perfect green salad made only with vegetables from our garden, an apple pie with apples from our tree, made by my grandmother; country ham and eggs fried in the same pan served on Christmas morning. 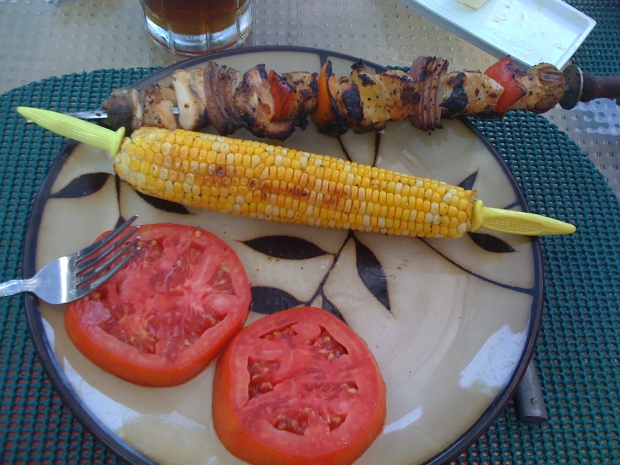 As I moved around the world (way too many times, apparently, judging by the French people’s reactions to my nomad ways), I added many things to that list: pulled pork barbecue from somewhere in Georgia, homemade biscuits from the Loveless Café in Nashville, a juicy, overflowing burrito from The Mission in San Francisco; a pint after a long walk down the Canal on a hot summer day in London; a perfect slice of New York pizza, with tangy tomato sauce and a hunk of mozzarella; shucking, then scarfing down fresh oysters somewhere in the middle of a beautiful piece of Nowhere, California; the smell of (ironically) French-oak barrels in a big glass of California red.

But that croissant. Butter, flour, sugar, yeast, milk, salt. What could be simpler? You can make them anywhere, yet somehow, they taste best here. Maybe that’s why when I bit into it today, crisp air tickling the back of my neck and me wishing for a pair of those tall boots, reminding me of fall and of my original home, I knew: Paris is home now. More than San Francisco. Not better than San Francisco, just more than, if that makes sense. Because I fell in love with it under the barest of conditions: without a job, without friends (not now, but in the beginning), with only the most rudimentary skills for communicating, and with nothing other than a vacationer’s knowledge of what makes Paris so Paris. Everything I’ve experienced here has been discovered through tougher circumstances than at home, in a different language, a good portion of the time alone.

Now, I run into people I know on the street. Friends of mine are randomly meeting other friends I know. I have my favorite places—there are so many of them and I’m dying to share them with anyone who wants to experience them with me. Though my French has a long way to go, I just now had a conversation with a woman about Clint Eastwood at the RNC and why she thinks Obama won’t win. (She just showed me a poll that says 50.4 percent of French people think Romney will win, 49.6 percent think Obama will.) And I just bought my first French book, a novel called Rien ne s’oppose à la Nuit. I might finish it in 2021, but I’m reading it, and with the help of my trusty French dictionary, I understand it.

Finally, I’m standing up on my Paris surfboard.

I need a haircut. My roots are showing. And did I mention? I’d love some of those sumptuous fall boots. I can’t buy anything, but strangely, I’m happier than I’ve ever been in my life. With my ratty clothes, my ratty nails, and my ratty hair. In my tiny apartment, my best friends and family halfway around the world. For the very first time in my life, I know that this is exactly where I’m supposed to be. I’m not looking ahead to a single thing.

Paris is home now. And I’ll do anything to stay here past December, when my supply of money will start teetering on the edge of Defcon One. Keep your fingers crossed for me, if you don’t mind. I hope they’re beautifully manicured, bejeweled with a gorgeous ring.

Or not, if that makes you happier.

5 thoughts on “Home, Fall, and My Paris Surfboard”